What the story needs

I'm back on target, 18,500 words done or about a tenth of my target  in only four weeks. If I can keep up the pace I will finish the first draft earlier than expected (in about 9 months). 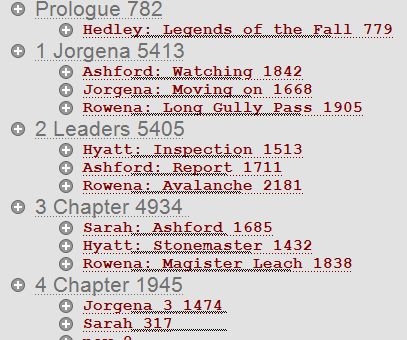 As can be seen I'm half way through ch4, which like ch3 is looking for a title. I have a penchant for one word chapter titles something that reflects the general thrust, which is curious because as can also be seen  I generally write three scenes per chapter each from a different point-of-view (POV). This often makes it hard to to find a common theme. If I had to give a reason why I do this I would say the chapter titles give a rough guide to where I am in the overall story, making it easier to back-fill  or edit past events so they flow seamlessly into the present.

For example:  Chapter 2 has changed from "Campaign" to "Leaders"  The original referred only to Hyatt's goal of taking over the world. I had not yet written Rowena's scene where she asserts herself over her companions (including her parents). So 'Leaders' better reflects the chapter as a whole;  my two major characters,  antagonist Hyatt and protagonist Rowena,  (incidentally half siblings) being shown to be leaders. 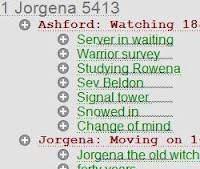 I write in Word on a PC running Vista making extensive use of outlining  - Chapters styled as "Heading 1", P'sOV as "Heading 2" and scene-lets (groups of  paragraphs) as "Heading 3" again for reason of tracking the plot/storyline.  The styling (colour and size) is my own and the headings are set not to print when I print a chapter to take along to read at my writers group

The POV character Ashford  is the renamed Lee (reasons in previous post) who turned from enemy to friend. Why? "It seemed like a good idea at the time".  I make this up as I go along.

Also from the outline you can also see I currently have five (5) POV Characters: Ashford, Jorgena, Rowena, Hyatt and Sarah. I don't count Hedley because his POV is only in the prologue. Five is a lot to handle and give distinct voices to.  (I had three in book I rising briefly to five 5 midway, dropping two and bringing them back at the end of book II - whatever suited.)

In my experience writing is learned by writing. Learning only stops when the writing stops.

re-hospitalisation is not a dirty word

Three months post transplant (19-8-10) is a significant milestone as these things go. All being well the specialist team begin reducing the high level of anti-rejection drugs. In my case, all was well, I began to feel safe, to relax and enjoy my renewed lease on life. A couple of days later I began to feel unwell, nothing extraordinary; an ache in the knees, an elevated temperature; it felt like the  flu. I duly notified the renal coordinator.

"What do I do if I get the flu?"
"Take a couple of Panadol and monitor your temperature,
if symptoms persist see your local doctor.

Sound familiar. The symptoms persisted on and off for a week with varying degrees of unwellness (depending on when I last took the Panadol)  Then one morning my temperature reached that magic number considered a fever in transplant patients 37.5C.


Seeing my "local doctor" was interesting -  My normal local GP who'd been with me from the start of the kidney problem was miles away. I had recently moved and  intended to stay a while in the new place. So a new local GP was brought up to speed and on advice contacted an FMC renal specialist. The usual bloods & urine were taken and then something that was new to me; a blood culture. Blood is extracted directly into a small bottle of culture medium which when shaken looks like a bottle of Tabasco sauce.


The results I got the following day at clinic. There were signs I might have a couple of infections, maybe Staph and probably CytoMegaloVirus- CMV

Cytomegalovirus,  a common viral infection. In healthy people, it causes a mild flu-like illness (touché) that passes harmlessly within a few days. In certain high risk groups like ......da da
organ transplant patients, it can be serious.

More tests. If it was important my clinic specialist would let me know. I went home and forgot all about it until I got the call about 5pm, "Please report to FMC (Flinders Medical Center) emergency for admission, we need to put you on intravenous antibiotics."

Oh shit -  I guess it's important.

FMC emergency waiting room 7pm after a hastily packing an overnight bag. We sat there for the next 4 hours hours before the long suffering Felicity had to go ( a long drive home). I got seen to about a half an hour later to get a Jelco put in and then back to the waiting room along with rows of patience in beds waiting for rooms. The only excitement was hourly measurements of blood pressure and temperature, eventually at about 2AM a bed was found in the EECU ( Extended Emergency Care Unit ) and the antibiotic drip connected.  All this played havoc with my sense of post transplant life;  3 months and I'm already back in hospital on a drip.


Things were not as dread as they seemed however. The staph result for which the antibiotic drip was a precaution turned out to be a false positive. The CMV, while potentially dangerous, if caught early is easily treated with oral antivirals.

Cut to the chase: I was transferred to the renal ward and enjoyed a couple day of  government hospitality. Enjoy in this sense -  I wasn't half as sick as my fellow inmates, prompt attention by my doctors caught it in time.

I read some, wrote some, talked some, had three, two coarse (well not that course) meals a day and slept soundly. The Jelco stayed in until the last moment but was never used again and when they tried to flush it before removal it had healed/sealed over. I came home  a whole lot better with a varied pill regimen, less of the anti-rejection and  a course of antiviral.

I would guess this will not be the last time I will have to be re-hospitalised. It aint fun but it aint that bad; certainly better than dead. So unless I do a Howard Hughes and lock myself away from life, picking up the odd infection or two is inevitable as is a couple of days back on a renal ward.

Now I'm back to as normal as I'm ever gonna get - until the next time.

My time, thought and energy is divided equally among the three things I most value in life, my relationship with my wife, my health and my writing. My health took top billing recently (to be the subject of my other blog - if time permits)  and put a dent in the writing, the real writing, the novel; blogging is a luxury.

Chapter one - done.  Half of the prologue and  a third of chapter 3 and  I'm working on chapter 2.  It should be obvious that the numbers at the end are the chapter's word count - I aim for around 5000 words per chapter - it suits my modus operandi.

The part of chapter three that got done was  because a scene involving POV character (Hyatt - a villain in the sense that he opposes the aims of heroine Rowena) got way too long and was split.

The Jorgena of chapter one is the mother, lover, mother-in-law or grandmother of almost all the important characters (nothing like keeping it in the family)  At the start of Break, she is a mysterious figure but never with a  POV, she almost disappears in Face but will play a pivotal role in Arch; time she spoke up for herself. 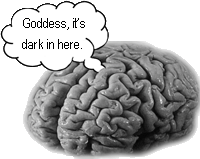 Lee (now Lee Proctor and upgraded from acolyte to Server) who I introduced as a  villain to kick off Arch is changing sides.

The process is difficult to describe. I was writing Lee's second scene where he reports to his superior  and was looking for a nifty ending.  A sudden thought had me hitching him to one of  Jorgena's twin daughters who have also been waiting since Break to play a part. Jorgena in chapter 1 mentioned them as traveling so I put them in Lee's home town.

I had no idea I would do this until it was done.  This is what I mean by a difficult to describe process - as Forrest Gump would say - it happens.  It happens as I write it, arising spontaneously from a restless mind in tune with the created world  and its characters - I think? 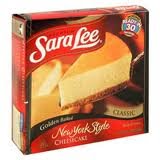 However the twins are Sarah and Lisa and I paired him with Sarah. So now I have a couple called Sarah and Lee which is no better than Lisa and Lee (I did Roden and Rowena in Face, another same first letter double act  is one too many)  Methinks Lee needs a new first name - principle of  last on first off.

I have also give Sarah a POV (I have in my sketchy overall plan a sacrificial role for one of the twins - which is as yet undecided).

Who knows what will have happened by my next blog?  I don't - yet.