Get Back on the Horse

It took more time that I would have imaged to get back to work. Finishing the first draft of the trilogy did me in. I could not get my head around not have that goal and deadline in front me
As I moaned on facebook, I felt lost. 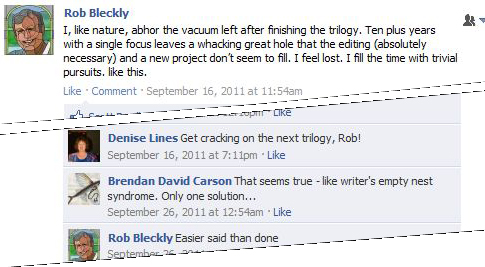 A couple of fellow writer's comments were, as I already knew, spot on - the writing equivalent of 'get back on the horse' but as I pointed out that's easier said than done.

I could give a list of extenuating circumstances why I was still on the ground staring up at the beast: It was the end of a 10 year project, Xmas/NY, heat wave, new grandson, pizza bar, hospitalisation etc etc ad nauseum - improper Latin but it works for me - I might even get a sympathy (or pity) vote but my  'extenuating circumstances' would still be bullshit excuses.

Now that I'm back at it, I've figured out why I had the problem  (me personally I mean - each writer will have their own way of dealing with falls)


I need to know the end.

That's only half of it but let's start with that. My usual approach for short stories is to start as close to the end as possible. But to do that I need to know where it ends. I have discovered that the same approach helped get my fingers on the keyboard.

Lets step back a bit. When I reached that magic moment of finishing the third and final book in the trilogy after 10 plus years at it, the light up ahead was suddenly behind me, there was nothing in front.  The concepts of editing it and writing something new were vague notions in the back of my mind, things that I would do someday when I finished. They weren't real. I was wholly focussed on the finish line, crossing it threw me.

Obviously I needed a new goal, a new end point to aim at, except what I had just finished was only first draft. It needed editing or it would never get submitted - Heinlein's rule 3.

I plunged into editing - sort of: I made character sheets, birthday calendars, time-lines  and detailed maps. I then put the three books into one file, stripped out the chapter breaks and divided it into scenes. That's when the real edit started, that's when the hurdles appeared, (plot holes posted in The Tyranny of Distances and I cringed that so many scenes/paras/sentences/words written a decade ago were simply not up to scratch. I fell off again.

Why? Well that has to do with the numbers game I played to get finished. The goal for the final book was one year, 180,000 words. (Roughly matching Vol 1 and 2) Simple maths gave me a good measure of progress; 3500 words a week, 500 a day, easy. It worked. I worked. I finished on time on target and I enjoyed the journey as much as the accomplishment.

I wasn't getting the same joy or sense of achievement from the editing. Something was missing.

Under the pressure of my deadline I always had to move on, to add to the story, to invent new characters and situations. I figured the joy of creation was the missing something.

Ergo I started a new story. This also gave me a better sense of progress, my daily word count. (counting edited words is close to a zero sum game.)

But the editing-which-must-be-done was always in the back of my mind and I hadn't started he story with an end. I was writing for the sake creating and feeling guilty that my massive finished trilogy was not being readied to submit. I needed to do both. I needed a goal that was half creating, half editing.

Half creating equates to 250 words a day.(this blog is more than twice that already) 250 can be done in hour or two leaving the rest of my writing time for the big edit yet 250/day still adds up to 90,000 words a year; 5 hefty short stories or a good sized novel. That prospect excites me. 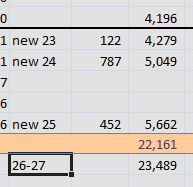 At the same time the editing now progresses - as at right. The orange line is a refinement point, abandoning the fruitless editing word count (except for new scenes). 22,161 is the total of words edited before scenes 26-27. Thus I am now 23,500 words into the edit with roughly 540,000 to go, ie 4% done.

Tomorrow I'll add my 250 plus words to the current story (which now has a known end) and start editing from scene 28 (of 1300 and something)  It feels good to be wriding again.

Or how I lost 4 kilo's in 4 day's
(don't try this at home)
gday gentle readers,
Thankfully I've been able to ignore this blog of late; it means I've been healthy, as healthy as man of my age with a kidney transplant can expect to be.

The drugs I take to keep the kidney from doing a dummy spit do so by scuttling my immune system, not totally mind, just enough; a delicate balancing act.

But it leaves me vulnerable to bugs that wouldn't bother an uncompromised immune system - Friday 6/1/12 I got one (or it got me) and I went down in a big way; it just couldn't wait the extra week for Friday the 13th.

Everything was fine at the regular Thursday clinic the day before: creatinine level, tacrolimus level, blood pressure, etc ~ cholesterol was a little high but not short term critical. 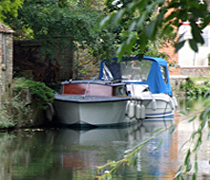 Friday morning I lost breakfast (the big spit, technicolour yawn) unfortunately only 5 mins after taking my anti- rejection pills. I took another dose and 40 mins later another yawn then the diarrhoea started.

This picture is provided as a courtesy, you don't need to see me vomiting and/or ...

I phoned my renal contact and let her know I was having a good clean out - both ends. My thermometer had a flat battery, I couldn't say what my temperature was but by the time I got to emergency about midday it was over 38'C and I wasn't feeling so hot, vomiting every 50 mins and diarrhoea whenever I sat on the dunny; I didn't dare fart when I wasn't.

For the next two days I was on a fluid drip with pre-emptive antibiotics and anti-vomit meds eating nothing because it would only come straight back at me. The vomiting slowed on the third day but the diarrhoea persisted to the fourth. After four days of that I was four Kilos lighter. As an extreme  weight loss measure it worked but the experience was not a pleasant one - as I said

don't try this at home.
Curiously the doctors have no idea what I caught, the cultures that grew from blood and stool samples didn't give them a culprit, a vicious mystery bug you wish on your enemies.

Until my next post
(may it be a long way off)

ooroo RoB
Posted by I Robot at 4:11 PM No comments: