A rod for my back

Methinks I have unwittingly done just as my title suggests and made 'a rod for my back'. Let me explain.

Somewhere in my world creating phase I decided my New Earth's civilisation, before it self-immolated should have made a couple of advances beyond old Earth. For this story I chose

Nothing new or dramatic just a couple of well-worn SF tropes as backdrop. 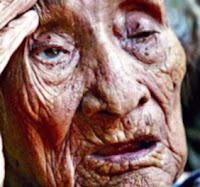 Now all this may seem straight forward until you think (even superficially as I did at the start) about someone living to be 700 to a 1000 years old. First I assumed that childhood is still about 20 years (Can't have our heroes not walking until 12 and still in nappies at 25) Next it occured to me that at the other end they are going to be old, as in their frail, pain-ridden, health challenged eighties and nineties,
for
two hundred years.


My story takes place a thousand years after New Earth's aforementioned planetary self-immolation called in the story "The Days of Fire." The planetary survivors are being helped by an AI they call the goddess who wants to breed a host for its consciousness to wake some orbiting survivors (Sleepers) in hibernation. The sleepers were about to journey forth and colonise another planet - New New Earth (only joking about the name)- when their existing civilisation went pear-shaped.
Back to the future: To obtain said suitable host the AI goddess has been paddling around in the local gene pool.

I decided (authors do that you know - a few taps on the keyboard and a whole planets disappear ) that longevity ought to be an inherited trait that has regressed on the demolished planet to the traditional three score and ten. Can't have non-contributing old people using resources - fine while the machines do all providing but The Days of Fire ended all that. 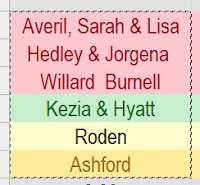 Cut to the rod: Again for reason of story I have POV colonists, POV locals of pure colonist stock, (who live to a 1000), POV locals with one colonist parent (live to 500) and POV locals with one colonist grandparent, (250) and a POV character of purely local stock (100) Arbitrary life spans decided by author and colour-coded for your convenience. (Willard, Averil, twins Sarah and Lisa and the heroine of book III Rowena (not shown in box) are locals of pure colonist stock - the other three are awakened colonists.) But that's not all: some of my characters pair up with people who are going age and die before their eyes if my story doesn't kill them first.

None of this was by design. I made it up as I went along and only now when I want to edit the monster are the complexities of differentially aging relationships coming back to bite me.

Here's a 1000 word picture slice of a spreadsheet I spent days of good editing time creating to sort out what's when two or more POV Character gather. I need to know how old they are and how old they look. 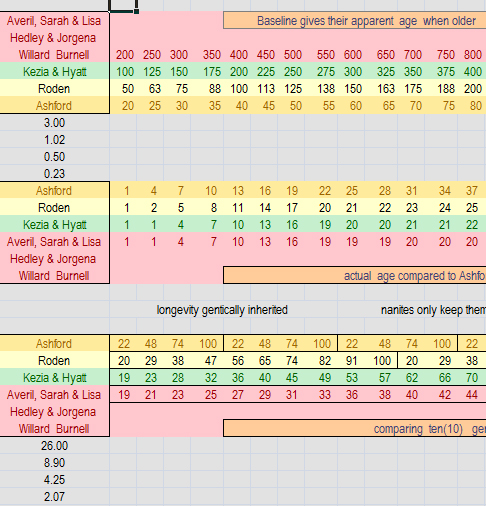 Why do I bother? Because no matter how good the story is, one wrong detail and suspension of disbelief collapses.

One of my characters, after a difficult encounter, sarcastically says "That went well." I feel the same way about my attempt to blog the process of writing book three in the trilogy.

I did warn - the blog might suffer to achieve my writing targets. It did. My last (delayed) post of cobbled together snips from my facebook page is a good example of "That went well - not."

Enough with the wailing & gnashing of teeth

Where am I? The last couple of months since finishing (besides futzing) I've been sorting a decade of associated material

Many directories shown have sub-directories. The names (obviously) reflect the contents

In the process I found I had multiple copies of nearly every file sometimes saved only minutes apart. I'm a hoarder and I don't trust computers; I save everything.
Even culled, sorted and assembled as at left, it's a lot of material. Why so much?
I'm writing SF


SF writer's start from scratch: size rotation, axial tilt, number of moons if any, ratio of land to ocean, age of planet, existing flora, fauna, and sentient life (Terra Nullius is a great concept but unlikely for any human colonisable planet) All these extra factors have to be taken into account while I edit. 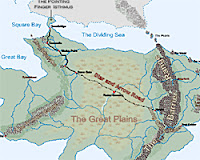 For example: I have several maps of my world so that my distances and directions are accurate and I can develop realistic weather patterns based on its geography.

For  'real world'  fiction, this is all done.
It's called an Atlas.


Hence the time spent sorting the plethora of collected material before serious editing. (I've also complied a heap of interesting stats on the work but that's another post.)

For those who've been following there have been several changes in story direction, characters, locations, props etc over the decade plus it took to write, though i have to admit a lot of them were done in the last year while writing book three. (post kidney transplant - brain function normalised) 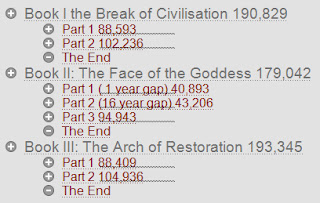 Most recently I've done the first full parse through the entire trilogy riping out the artificial chapter divisions in favour of a scenic route. [I work in Word and use outline extensively.] The results in parsing are:

1. I've deleted all prologues and interludes. They were all from Hedley's POV. (An awakened colonist  managing the planet for the AI.) I've decide on a different approach for him and for the prologues.

2. Book Two is now in 3 parts which buggers the carefully designed pattern I started with but as always, the needs of the story trump the designs of the author.


I now have the 560,000 words spread over 1300 scenes. Time to justify the need for each scene then reorganise what's left.

Finished - where to now?

The Prologue
This post was drafted ages ago but not posted. Why is a mystery. I guess I was just emerging from the mind-numbing blank time after finishing the trilogy as noted below.

The problem with finishing a big project that took a long time is where to now?  In writing the problem is exacerbated by the fact that finishing is a relative term. Ive had several of them: finishing Bk1 Feb 2000, Bk2 aug 2010 and the Bk3 last week aug 2011.

All dates refer only to finishing the first draft. Book 1 has gone through three, losing 30,000 words in the process. Book 2 its hard to say with all the stops, starts and backtracking - the original start is now in the middle of the book - a real dog's breakfast. Book 3 is the only one written from start to end with only superficial editing.

This how finishing went on my Face book page. Towards the end I was writing furiously with no time to blog.

I've just started work on the last scene, of the last chapter, of the last book of my thrilogy (Freudian slip or wishful thinking?) begun Sep 1995. ( that date is true but misleading, the work has been intermittent as I will blog when the whole damn thing is truly really actually finished - excluding the editing)

The blog promised above has been a long time coming. when i stopped writing the trilogy I stopped writing. Almost a month went by until I appeared drunk in charge of a keyboard.

this is waht happen when you have nothing to do you waste your face on life book.

I, like nature, abhor the vacuum left after finishing the trilogy. Ten plus years with a single focus leaves a whacking great hole that the editing (absolutely necessary) and a new project don’t seem to fill. I feel lost. I fill the time with trivial pursuits. like this.

This drew a few comments from fellow strugglers-with-the-muse. to which I eventually replied

what I am doing is reshaping the chaotic sprawling tome/s into something resembling a story - Severne's tits - the contradictions, misdirections, blind alleys, bad science, and crap sentences are as numerous as stars ...

Now its all done it has to be edited.

ooroo
Posted by I Robot at 3:56 PM No comments: