too late - the end is nigh

gday gentle readers
And here below is just how nigh it is as of 17/7/11, on time and on budget, or writely speaking I look like meeting my deadline. 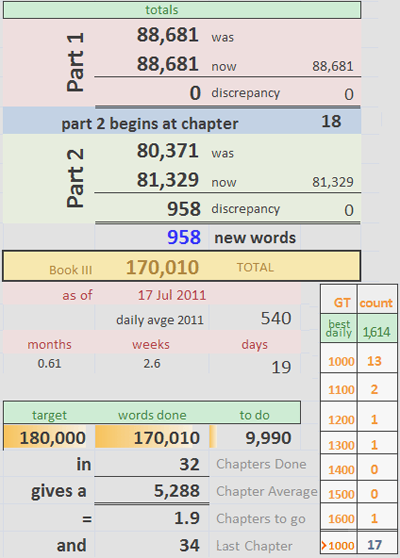 There are several things about this that please me, I have succeeded in pushing myself to meet the weekly target for a whole a year now. One push resulted my best daily count of 1600 words. In fact most of the 17 days > 1000 words have been in the last couple of months, partly because I could see the proverbial light at the end of the tunnel, partly because its winter and I can't get out in the afternoons, partly because I have simply got faster from doing it (almost) daily for 12 months and partly because the pace of the story is accelerating as my grand plan comes together.
The one thing that doesn't please me is that the task of blogging the process has failed - way too intermittent I did say the writing would come first. I will however try to do better with the editing (coming soon to a blog near you.)

The cull from my  monitoring spreadsheet estimates 34 chapters at completion but that won't happen. The story will finished when everything that needs to happen, happens and I can already see it will go longer.

When I say the end is nigh I mean in comparison to when I started in 1995 (though it hasn't been a continuous journey) there is still the edit while I look for and agent to help get it published.

The problem is I seriously wonder if it will ever happen. While I was plugging away the world changed. That wonderful disaster, the Internet, took off

I recently found a reprint (re-e-print?) of one of my flash fictions in an unlikely place.  It was first published in Antipodean last century (1999) reeprinted here(2009). Now I'm not complaining I'm pleased someone found it of value but as said on facebook ...

I'm concerned about my future earning potential as author. Bookshops are collapsing in the face of online sales, E-books are coming on strong and piracy is rife.

I have friend who downloaded 26,000 books in one shot some of which were current on his shelves and it was 'free' - in the sense that he didn't have to pay for it. I would be hard pressed to read 26,000 books in my lifetime yet it will fit on a 16Gb pen drive. Words, it seems, are cheap financially and in terms of  digital storage.

It seems no matter how you originally publish, once some has it they can scan it, copy it or type it, and make it readily available over the net for free. Why - because they can.

Im old: pre-TV, pre-PC, pre-Internet. The wired generation, who have embraced the Internet generated idea that everything should be free, is here NOW. Regardless of copyright the gap between first publication and freely available is closing so although ..

That remains to seen
ooroo
Posted by I Robot at 11:48 PM No comments: