To adapt a Forrest Gump: writing ...is like a box of chocolates. You never know what you're gonna get. I know only where the story is going to end up and roughly who will be there, but when I sit down each morning to write I have no idea what will happen next. I make it up as I go along.


For various reasons, all of which end in the same point, it's been a while since my last post to this blog. The point being: "The Writing comes First", all else (including this blog) comes after I've done writing the novel - like now. So to bring this blog up to date here are the quick stats - almost twice as much done as when I last blogged.

I'm now seven chapters into part two, the complexion of the story is now more SF than Fantasy and everything has changed. (that's the trouble with making it up as you go along, rather than following a detailed outline) 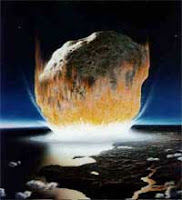 The thrust of the trilogy has been the AI goddess (Seven/ Severne) breeding a host (our heroes Willard then Rowena) from a section of the remnant population of a nuclear war(The Day of Fire) so she/it can go to the orbiting station (Severne's Eye) and wake the sleepers (colonists) to help save the world (Nuaith) from the AI's predicted planet-busting asteroid strike.

I'm now at the point where Fedral Charismatic Hyatt (the enemy) breaks into the Uplander's (our heroes) core homelands just as Jorgena pilots the shuttle up to the orbiting space station 'Severne's Eye'. One of the changes this caused was making a distinction between the station and the starship full of hibernating colonists; originally, the 'Eye' was both. I'm going to need plans.

I chose Willard and Sarah, to go with them, each for a reason; Willard to find his father, Sarah (twin to Lisa - both Restoration Warriors) because she looks like Rowena (to be a sacrificial stand-in). The other two Rowena, now the Face of the goddess, and Jorgena, the pilot, had to go. As it turns out this gives me a father-daughter and mother-daughter pairing, which complicates the Sarah/Rowena substitution, where each pretends to be the other. Fooling their respective parents took some serious writing.

I also introduced a new POV character, Burnell. (I now have six but there are going to be more, especially in the earlier volumes of the trilogy, for reasons I will explain my next post - it has do with what I've been reading.) Burnell is a newly awakened colonist, leader of the expedition to the next new world, and of course Willard's father. They dislike each other on sight. Another change suggested by my wife (as was the name) has been to make the onboard AI not so artificial, at its core is person. I like it, it has great potential. Goddess, it's a lot of fun playing god.


The latest and biggest change has been a reevaluation of the original plot. The AI made a mistake - bad data


the asteroid will miss
This is a profound change of direction and destroys the end I have been aiming for ten years - that's life. I will now have to put a great deal of thought into how to bring the trilogy to a satisfying conclusion.
I love a challenge.