The tyranny of distances


They say write what you know. Well I've lived in Adelaide, Woomera, Darwin, Sydney and Bruny Island (south-west of Tasmania) and I wanted to include my experience of that diverse geography in my made-up world. Hence the mud map made a decade ago resembles and has the rough dimensions of Australia. I set the protagonists home town of Deep Creek in the foothills and the capital Grundston on the coast then set Deep Creek at Adelaide's latitude - where I have lived most and live now. 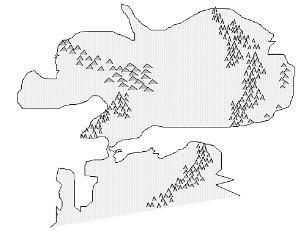 The first thing to note is my careless positioning of the main range in my quick sketch - much further inland (MISTAKE #1) than its Australian template and thereby hangs this tale, quite literally; like that little blue circle on your PC screen that says "I'm thinking I'll get back to you". I wrote book one, the one I'm trying to edit, using this map as a guide, guessing the distances (MISTAKE #2) and then as I wrote, mentally substituting the Adelaide hills for the Great Dividing Range (MISTAKE #3).

The tale hanging tyranny of distances are those between the Mountains and Coast.
Adelaide 10 miles.
Sydney 40 miles
and according to my map
Grundston 250 miles

So in ch3 when Averil, one of my heroines, sits on rock comparing the roof styles of the town below and the capital she's got damn good eyesight. Locally that's like picking out Adelaide's rooves from Woomera (in the US try seeing Washington's rooves from New York) 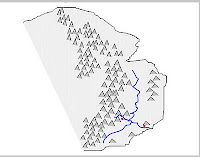 Which brings me full circle. In my last post I figured I had to delay Averil 12 days so she couldnt catch the contingent before they reached the pass 500 miles away. I'd only just measured that distance and calculated the relatives speeds. Now my dividers have wandered further over my map.

During the original writing I imagined Averil was only a days journey from the contingent's starting point - Grundston. I wrote imaging the distance from the mountains to the coast was about 10 miles not 250 miles. At 250 miles its going to take her 12 days anyway. The one-day delay I already had is enough for her to need a horse or a short cut.

The problem resolved itself.

If only I had read ahead I wouldn't have had to write an extra scene (600 words) or wonder how to get her story back on track after it. 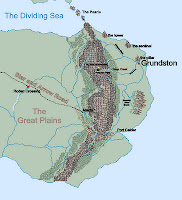 Unwittingly (me being witless) I also have her sister Kezia, in the first scene of Ch3, make the same 500 mile return journey in a single day. That I fixed by having her go only to the next town not to the capital Grundston. But even with my godlike authorial powers I can't move these mountains. The story returns to this area in the last book using the later, detailed, upside-down and carefully measured map.

I'm still only in chapter 2 (scene 11 of 1302) of the trilogy and still finding non trivial problems about a rate of one per scene.

The latest is a distance/time problem.  My heroine must catch a marching army before it reaches a certain point some 500 miles away. She has been delayed and I put this though into her head.

"I will have lost a whole day; the contingent will be gone, hard to catch even with a horse."
A bit of basic research however shows a marching army even with horse and carts can travel at 3mph.(18 miles per 6hr day)  My ultra fit well-trained heroine I let travel 5mph (about half the speed of an Olympic Walker over 30 miles) or 30 miles per 6hr day - as if she would only do 6 hours a day when she is desperate to catch them.

But that means she will catch them midday on the third day when they've only gone 45 miles nowhere near the 500 mile cut-off point. Even if I somehow delay her for 3 days she will still catch at the 135 mile point - still well short of the mark

Did she just think, 'even with a horse' perhaps she isn't as well trained as I thought. To make it work I have to speed up the contingent, slow her down, delay her 12 days or rearrange the geography yet again.


Let me add that this was not just a throw away thought, it was designed to show she couldn't catch them and hence was forced onto a dangerous less-well travelled path. I just didn't think it through: My map wasn't to scale, I didn't consider the relative speeds of the contingent and my heroine.

It will have to be the delay, in the context of the remaining 500,000 words, the other solutions are no longer negotiable. It will still be a hefty rewrite because on her journey out she crosses paths with others in a critical sequence which precipitates the hero's journey. 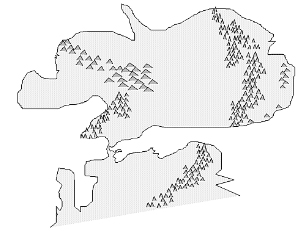 This all came about because my map was upside down

I'm Australian ergo southern hemisphere ergo if you go north it gets hotter. Naturally I wanted this for my world but my original map had the adjoining enemy continent south of my hero/heroines homelands.

The southern continent got so big during the telling of the later part of the tale it necessitated turning the entire map upside-down and that's when it all started going wrong. I've spent several days redrawing all the maps to fit the completed trilogy. It's a little more sophisticated (a.k.a. creeping elegance) than those drawn a decade ago.

Oh well, back to plotting board.

p.s. Later that same night. On thinking about it a 12 day delay will work nicely but it requires a brand new scene (#1303) in a story that hasn't had a radical change since last millennium.