I have surprised and surpassed myself, getting half way through the first chapter in only a couple of days. For professionals my pace would be considered slow. All I can say is it suits me for the moment and as I get back into regular writing it will improve.  As it turned out starting was easier to do than talk about doing. My solution of where to start, was to invent a new enemy to confront my four principles (left at the end of Book 2) as they began their final journey. This  new character is watching them come across the border, in fact has been set to watch for them and knows their histories.  This gave me a great opportunity to fill in the story so far for readers who start with Book 3 "The Arch of Restoration" aka "Arch"

I chose the name from a book of baby names. (I have  many but the one at left is the one used for this trilogy)  I opened it at random and looked for old English names. The original impetus for old  English came from researching my family tree, I came across a name I wanted to use.  Having started down that road I kept going, mainly for consistency. Character names are important, they come with baggage: gender, ethnicity, culture.  I wanted an homogeneous society. 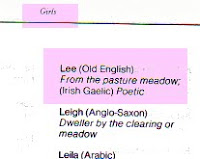 The page I happened to open this time was in  the Girls section and the first old English name I came across was Lee. I then checked my spreadsheet  to ensure I hadn't already used it.  This is not an unbreakable rule (none are) but I like to keep my main characters distinct. Any 'Point Of View' (POV) character is major.  I found it used for my hero's mother's middle name. - not a problem so I added it to the sheet which records name rank and serial number (all the important details) of each character as I invent them. 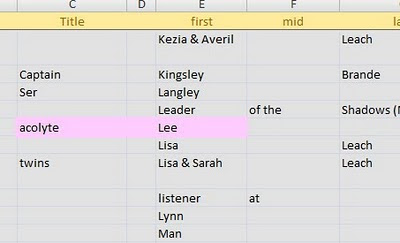 At this stage all Lee has is a first name and a title. The entry will grow with the character.Until now I have avoided using a personal pronoun for Lee. I got the name from the Girls page so I wrote her in as female. The next scene was also from a female POV and the one after that from the POV of two females in the same head. Too many female POV's for this old male to handle.  So I changed Lee to male and rewrote the scene.
Interestingly the slice of spreadsheet above contains 4 major characters,  all sisters, two of which have been POV Characters - the baby book must not so randomly fall open at  'Girls - L'
The story continues
Posted by I Robot at 6:50 AM No comments:

And so begins Book 3 in theTrilogy

The six words below are the culmination of 10 years work ( on and off - in reality, a fair bit off ) That, I would suggest, is part of the writing life - the life part goes on whether you write or not.

Needless to say I went out an celebrated last night and began thinking about how to start book three.

A digression  on working practice and targets.  I work from home as a part time contract web developer. My time is is mine to allocate, so I write in the mornings and, when there is work, develop in the afternoons. I write 6 days a week and have Sunday's off provided I reach my target word count. 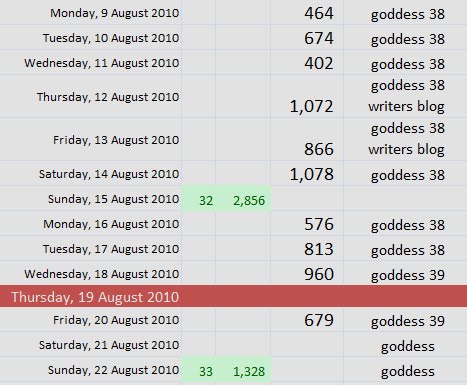 This is the last two weeks i.e. weeks 32 and 33 of 2010, the green figure next to the week,  is the number of words in excess of my target  (only 1700 words a week post recovery - I'm about to double it)  Under target would be highlighted red.  Next is the daily word count and piece worked on. The words of this blog will slot into the empty hole for Saturday,  21 august 2010.   The highlighted day is the three month anniversary of my kidney transplant - this is the life part that often interrupts the intention to write - hospital visits blood test tissue samples etc - and nothing written.

Like the previous volumes book 3 ( Arch / The arch of Restoration )  will be divided into two parts. I have specific climatic events planned for each, and a specific end goal but the journey, the actually events and the characters we will meet along the way are as yet a mystery. My biggest problem at the moment is how to start,  much the same problem I had finishing book 2 - in my mind the story line is continuous and yet conventional wisdom and common sense says each volume should stand alone.

Which means book 3 needs a hook and storyline that points to goal but that does not rely on the events in the preceding volumes. What I've decided to do is worry about it later. My need to write to myself imposed deadline/target is paramount and I have plenty to be going on with. What this means in practice is I'll start with  chapter 2 of  book 3 as a continuation of last events in book 2 and insert Chapter 1 and/or a prologue later when I have a grip on the new characters I develop to  populate book 3.

I went straight  into Book 2 the day after finishing Book 1.   We were still in a flat in Sydney, Felicity at work and me home - what else was I going to do?  Taking a break in the circumstances (where my wife Felicity is working to support my writing habit) did not seem politic besides my reading of the many tomes on "How to write ..." almost universally suggested letting a newly completed manuscript gestate a week or two before revising. Who am I to argue?

October 2000 we returned to our Ironbank home in the Adelaide hills and me to the the Blackwood Writers Group  - hereinafter BWG, not that I ever left in spirit thanks to the internet.   I came back with six chapters of Book 2 which started with the daughter of main protagonists - a generational change - 20 odd years after the closing event of Book 1   (incidentally book 1 covered a single year)

About now I ran out of steam - not writers block so much as I didn't like where the story was going , it was on a side track heading away from the goal I had in mind and getting bogged down.

I decide to quit and revise book one for insights but that's a whole other story of which this is a quick summary  Revision 2 finished Dec 2000 at 196,000 words -  It went to 9 revisions  topping at 210,000, was broken into two books (hence later the 2 parts to each book), reassembled, culled and  revised endlessly with the object of sending it out while I worked on book 2.

However Book 1: The Break of Civilization  (Break) still needs work ( it's on the net if you want to help) but  I have decided to finish the whole trilogy then revise bearing mind what's to come. Still there is something to said for the naivety of the characters when I and they didn't know what was to come.  Too much editing is often worse than not enough.

Back in book The Face of the Goddess ( Face) two I started working backwards from the opening to fill in the years between Bk1 and Bk2. Several attempts, prologues and opening chapters were written and thrown away.  I felt, quite literally, like I had lost the plot. To cut a long story short.  It has taken from  2001 to 2010 (9 years)  to get book 2 from 6 chapters to near completion as it is now.   The original start is now chapter 14.  60,000 words have been inserted.

9 years - LIFE got in the way - Health issues,  a house move  and new bookshop - a 7-day coffee-shop/post-office/bookshop  as below. (those three years devoid of writing)  an operation,  a world trip 2004 (recuperation), two house moves, another world trip 2007 just in case  (during which I plotted in broad strokes the rest of the trilogy) Another house move 2009 and another operation 2010 (see my blog "That's Life" )
Funny how I used to think a book shop the perfect business for a writer.  I tried it twice; the first failed because I wrote - the second thrived but I wrote almost nothing. There's a moral there somewhere.

Next post will be as I start book 3,  sometime next week -  Yaye!


As I've said elsewhere the second book in the trilogy is racing towards its end, health issues as blogged on That's Life (http://eyeoftherobot.blogspot.com/) have settled, and left me feeling better than I have in years.

So I have decide to Blog the whole damn process of writing the next novel; the third in the "legends" trilogy ~ working title "The Arch of Restoration" ~ hereinafter referred to by its short title "Arch"

First some background: The trilogy began in Sept 1995 in Fort Collins, Colorado: as they say in the classics - it was long ago and far away.

I was there on holiday and to save a failing relationship; It didn't work out but the novel stuck and on my return, grew and grew and gradually morphed from a love triangle into fantasy trilogy. But it didn't happen overnight. I was then in the middle of  decade of crisis, alone, jobless and with a recently deceased mother. So I opened a secondhand bookshop.

In 1966 when I started the Blackwood Writers Group  my father had also passed on,  the bookshop was failing and the few odd scribblings that became book one of the trilogy, languished in the bottom draw.

The group mostly SF writers reinvigorated me  as they followed the well worn track to publication by writing short stories and 1997 saw some early success for almost all group members; enough by 1998 for a anthology to showcase our work. http://www.blackwoodwritersgroup.com/Tessellations/index.htm

By then my short stories were getting longer and longer and I decided  to again tackle the novel.  I like the space a novel gives to explore.  It was about now that the story began morphing into the trilogy using a short piece that couldn't find a market as the prologue. This changed the Fantasy into SF.

I was about 10,000 thousand words in by 1999 when I met and married Felicity and we moved to Sydney  for her work.in September of that year. My decade of disquiet was over. I worked full time on the novel. The first draft finished up at 163,000 thousand words.   Here' a clip from the end of that draft.

The trails and trials of  book two next post
'Ooroo